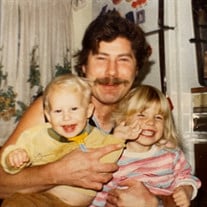 David "Paco" Richard Paukner August 13, 1951 - February 12, 2022 I could use this opportunity to recount my father's life, the details, the dates, the people and the places, his profession, and his accomplishments, but that doesn't feel... View Obituary & Service Information

The family of David "Paco" Richard Paukner created this Life Tributes page to make it easy to share your memories.

Send flowers to the Paukner family.