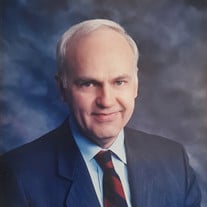 David passed away peacefully on March 6, 2022, at age 78 after a valiant battle with Parkinson's Disease and Lewy Body Dementia. David was born on July 29, 1943, in Duluth, Minnesota to Rev. Albert and Merle Hendrickson. His grade school years were spent in Cloquet, MN and he graduated from Marquette High School, Marquette, Kansas in 1961. He graduated from Gustavus Adolphus College in 1965 where he met his wife, Susan. They were married 55 years. After graduation from Gustavus he entered medical school at the University of Minnesota followed by an internship at St. Paul Ramsey Hospital. They moved to Omaha, Nebraska where David served as a general medical officer at Offutt Air Force Base. He went on to do his ophthalmology residency at Scott and White Medical Center in Temple, Texas before returning to Minnesota to open his own ophthalmology practice in Hastings, MN where he worked for 37 years and served on the board at Regina Hospital. He was the first of many clinic specialists recruited to Hastings. Improving and restoring sight was his passion, and he especially enjoyed cataract and LASIK surgery. After his retirement David and Susan moved to Chanhassen, MN and later became residents of Friendship Village in Bloomington. David was a gentle, stoic man with a sly sense of humor and always a twinkle in his eye. He loved traveling, with regular family trips to Colorado for skiing, and to Florida and Hawaii for those warmer winter temps after retirement. David and Susan were able to travel to many other world countries. Highlights were a trekking trip to Nepal and a special trip to India with his son and daughter for his 70th birthday. He also enjoyed golf and loved spending time with his grandchildren, always bringing them along for early morning doughnut runs. In addition to his caring wife, Susan, David is survived by his son Matt (Elizabeth) and daughter Erika (Steven) Connelly, three grandchildren Alex and Simone Hendrickson, and Maxwell Connelly as well as three sisters, Sharon (Karl) Gronberg, Rachel (Bruce) Julian, Rosanne (Mark) Swanson, and one brother Peter Hendrickson. A celebration of life will take place on Monday, March 14 at Normandale Lutheran Church, 6100 Normandale Road, Edina with visitation at 10:00, service at 11:00 and a reception to follow. Masks recommended. Private interment. Memorials may be made to Normandale Lutheran Church, Michael J. Fox Foundation for Parkinson's Research and Regina Hospital Foundation in Hastings.

David passed away peacefully on March 6, 2022, at age 78 after a valiant battle with Parkinson's Disease and Lewy Body Dementia. David was born on July 29, 1943, in Duluth, Minnesota to Rev. Albert and Merle Hendrickson. His grade school years... View Obituary & Service Information

The family of Dr. David A. Hendrickson created this Life Tributes page to make it easy to share your memories.

Send flowers to the Hendrickson family.