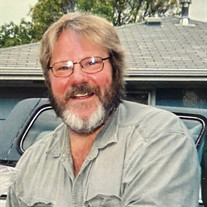 On March 17, 2022, Daniel (Dan) George Krone began his journey to Heaven. Dan was born on November 25, 1958 in Minneapolis, Minnesota to George Christian Krone & Janice Marie Krone. Dan graduated from Park Center High School, Brooklyn Park, Minnesota in 1976. He resided in Brooklyn Center, Minnesota. He was a machinist for Bergman Machine for many years. Dan enjoyed the great outdoors with his family. His favorite pastimes were hunting, fishing, shooting guns & bows, riding his four-wheeler and anything to do with nature. His favorite place to spend his time was "up north" outside of Staples, Minnesota off the Crow Wing River. Dan was a loving son, brother, uncle, great-uncle and friend. He enjoyed hunting and fishing with his brothers, nieces & nephews. He loved and spoiled his nieces, nephews, great-nieces and great-nephews as if they were his own children & grandchildren. Dan was known for the giant bear hugs that he would give to each of his nieces & nephews. There was never a doubt that he loved & cherished all of his kiddos. Dan had an awesome laugh that filled the house and he and his brothers and mother would banter back and forth during the family gatherings. His brothers were his best friends and his brothers thought that of him as well. He loved his mother and sister dearly and would do anything for them. Daniel is preceded in death by his father: George Krone; nephew: Andrew Bedard; uncle: Ralph Duran; uncle: Clifford "Bud" Pulsifer; Grandmother & Grandfather Pulsifer; Grandmother & Grandfather Krone. Daniel is survived by his mother: Janice Krone; sister: Shelly (Beeb) Smith; brothers: Paul (Cheryl) Krone, Mark (Shelly) Krone, Michael Krone, Thomas Krone; Nieces: Catherine (Stephen) Hoffard-Rose, Elizabeth (Johnny T.) Krone, Holly (Josh) Judisch, Victoria Krone; Nephews: Adam (Sarah) Krone, Curtis Krone; Great-Nieces: Julia Tafoya, Lydia Judisch, Kiera Judisch, Lily Krone; Great-Nephews: Gunner Hoffard, Jesse Hoffard, Daniel Hoffard, Henry Krone, Aunts: Barbara Duran, Mary-Lou Pulsifer, cousins, and many dear friends.

The family of Daniel George Krone created this Life Tributes page to make it easy to share your memories.

Send flowers to the Krone family.