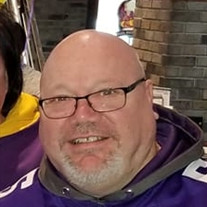 Fisher, Daniel Joseph age 57, of Maple Grove, was killed in his car while waiting for a light with his wife, in Brooklyn Park, MN May 15, 2022. Dan grew up in north Minneapolis on 6th Street where so many memories were made being surrounded by awesome friends, families and neighbors. He went to Ascension Church and School and graduated from DeLaSalle High School. Dan (known as Fish to some) played football, baseball and softball with many different friends throughout the years, Partying with the Bunker team was a big highlight- always helping the team sing "Under the Boardwalk" at the bar after the games. He was also in a bowling league for many years where he also met many friends. He spent his years after school working at Ault Incorporated and was currently employed at Mocon in Brooklyn Park. He spent a lot of time dedicated to raising his boys, Drew, Jeremy, Raymond and Bo. He married Katie (his perfect match!!) in 2010 and was welcomed in to the Doherty family. Soon they were blessed with a daughter named Grace and the three of them became inseparable and made family traditions a special part of their lives. Much of their time together was spent supporting Grace in her dance program for KMC, Dan even did the Father/Daughter dance for one recital. Dan was an avid Minnesota sports fan with a passion for the Minnesota Vikings. He was a smart guy who could beat anyone at trivia! He was witty, funny and a great storyteller. He was a fun person to be around; you could always find him with a cold Bacardi-Coke. His loud boisterous laughter will be something many will remember most about him. He will be missed beyond measure by coworkers, friends and family. Skol!! If you would like, please wear Vikings apparel or colors. Dan is survived by his wife, Katie; sons Jeremy, Raymond, and Bo; daughter Grace; grandchildren, sister Theresa (Dale); nieces, nephews, family, and friends. Preceded in death by his parents, Jerry and Kay Fisher; Son Drew. Visitation Fri., June 3 at 10:00 am at St. Gerard Church, 9600 Regent Avenue North, Brooklyn Park. Mass of Christian Burial at 11:00 am. Interment 1:30 pm at Hillside Cemetery, Mpls. In lieu of flowers memorials preferred. www.Washburn-McReavy.com Hillside Chapel 612-781-1999

Fisher, Daniel Joseph age 57, of Maple Grove, was killed in his car while waiting for a light with his wife, in Brooklyn Park, MN May 15, 2022. Dan grew up in north Minneapolis on 6th Street where so many memories were made being surrounded... View Obituary & Service Information

The family of Daniel Joseph Fisher created this Life Tributes page to make it easy to share your memories.

Fisher, Daniel Joseph age 57, of Maple Grove, was killed in his...

Send flowers to the Fisher family.