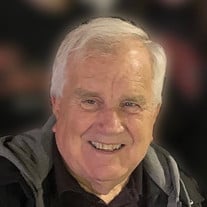 Daniel G. Anderson, The world's best Papa passed away on April 27, 2022 due to complications from cancer. He was born on June 21, 1943 in St. Peter, MN to Dudley and Evelyn Anderson of Le Center, MN. Dan married his high school sweetheart, Geraldine (Gerry) Malinsky, in 1964. They have resided in Bloomington since 1976 after welcoming five children between 1965-1977. Following two years in the army stationed in Okinawa, Dan became a career-long financial planner with Northwestern Mutual. A loyal 1965 graduate of St. John's University, Dan maintained a lifelong connection to CSB/SJU, and every child followed in his footsteps. Between his kids' activities, Dan enjoyed yardwork, bowling, bridge, snow and water skiing, traveling, family road trips and visiting with everyone he met. His favorite role of all was being Papa to 12 beautiful grandchildren to whom he never said "no". Gerry provided daycare for their grandchildren once a week, but as the brood grew from 5 to 12, Dan was hired, too. Thus began Grandma & PapaCare, and Dan spent every Tuesday with the "Little 7" for years. He and Gerry enjoyed many years watching soccer, football, gymnastics, hockey, baseball, dance and piano. He was each family's evening babysitter, one grand-dog's regular walker, and the official planner of Popcorn Parties. He loved every minute. Dan is survived by Gerry and children, Lisa (Gregg) Leininger, Mark (Jenny Markert) Anderson, Dana Anderson-Helstrom, Sara (Cap) O'Rourke, Ryan (Katie) Anderson. His grandchildren include Amy, Sophie & Maggie Leininger, Hailey & Henry Anderson, Kayci & Siera Helstrom, Mason & Paige O'Rourke, Olive & Frankie Anderson, all of whom miss him already. Further survived by sisters Mary Anderson and Ava (Bruce) Blum. He was preceded in death by his parents, brothers Jerry and Mike, sister Nancy, and his precious 9-year-old grandson Tucker. The Celebration of Dan's Life will be Sunday, May 15, 2022; 1:00 to 4:30 pm, program beginning at 1:30. Mask Recommended. Hyland Hills Chalet, 8800 Chalet Road, Bloomington. Floral arrangements for the service can be sent to: Wasbhurn-McReavy.com Strobeck Johnson 952-938-9020 1400 Mainstreet, Hopkins

Daniel G. Anderson, The world's best Papa passed away on April 27, 2022 due to complications from cancer. He was born on June 21, 1943 in St. Peter, MN to Dudley and Evelyn Anderson of Le Center, MN. Dan married his high school sweetheart,... View Obituary & Service Information

The family of Daniel Girard Anderson created this Life Tributes page to make it easy to share your memories.