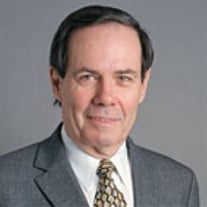 Dale Irving Larson, born August 12, 1937, passed away peacefully May 10, 2022, in Naples, FL. He lived a life full of adventure and curiosity in all things, and with deep love for his family. He is survived by his wife of 62 years, Janet (born Wilson), sons Mark and Scott, and grandchildren, Jasper and Sabrina, to whom he was known as Poppi. His embrace of language was always present, from his long career in the law, conversations and storytelling that formed the basis of long friendships, and loving poems to his grandson. A native of Minneapolis, Dale later moved to Moorhead where he graduated from Moorhead High School in 1955, then served three years as a paratrooper in the 11th Airborne Division. His service took him to the Deep South and subsequently Germany and beyond, planting the seeds of a broad perspective and instilling his skepticism over conventional thinking. He then tried his hand in broadcasting as a TV reporter for KXJB-TV in Fargo and for WCCO-TV in Minneapolis. He earned a BA from Moorhead State and an LLB from the University of Minnesota Law School. Dale then had a 40-year career as a trial lawyer based in Minneapolis, including as a partner of Robins, Zelle, Larson & Kaplan, a founding and managing partner of Zelle & Larson, and a founding partner of Larson•King. Dale was energized by handling, managing, and resolving controversies with many excellent colleagues and staff in state and federal courts from ocean to ocean and border to border, often involving notable civil catastrophes ranging from the largest bank fire in U.S. history at our local Northwestern Bank of Minneapolis (now Wells Fargo) on Thanksgiving Day 1982, to wide ranging National and international controversies like the collapses of the Hyatt Regency Hotel and Teton Dam, to mass torts over Dalkon Shield, silicone breast implants, asbestos, and many more. Dale enjoyed skiing, boating, golfing, traveling, and spending time in the company of his friends and family. A private burial was held in St. Paul at Ft. Snelling National Cemetery. He is missed but not forgotten.

Dale Irving Larson, born August 12, 1937, passed away peacefully May 10, 2022, in Naples, FL. He lived a life full of adventure and curiosity in all things, and with deep love for his family. He is survived by his wife of 62 years, Janet (born... View Obituary & Service Information

The family of Dale Irving Larson created this Life Tributes page to make it easy to share your memories.

Send flowers to the Larson family.