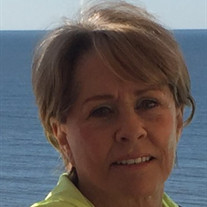 Colleen "Colly" Booth, 77, passed peacefully in Bloomington on Wednesday morning, December 15, 2021 with her daughters by her side. She is preceded in death by longtime partner, Daniel Prziborowski; parents, Thomas and Bonnie Quinn; sisters, Susan Phillips, Wendy Adelmann; brothers, Thomas Quinn Jr., and Patrick Quinn. She is survived by sisters, Teri (Kevin) Ahlgrim, Kris Hasbrouck, Char (Shawn) McKeown; brother, Mike (Pam) Quinn; daughters, Riki (Jeff) Carlston, Denise (Rick) Swenson, Jodi (Brad) McMahon; grandchildren, Tyler, Blake, Nicholas, Michael, Kelsey, Cory, Samantha; and three great-grandchildren. Colleen grew up in Richfield, MN and raised her family in Bloomington, MN where she stayed for the remainder of her life. Colleen was a dedicated employee of Red Owl/Cub Foods for over 40 years until she retired. Colly was also a dedicated mother, grandmother, and a friend to almost anyone she met. No one looked up to her more than her daughters, who wouldn't be who they are today without her as their mother. There was nothing that made her happier than spending time with family and being there for people when they needed it. Colly was very selfless and often driven to be a positive force in people's lives. If there was anything you needed, she would know it before you even called. In her later years she enjoyed being down at her cabin on Cannon Lake in Faribault, MN where the boat rides and bar time were abundant. She will be missed dearly by many other friends and family, but her spirit will forever live on in the hearts of those she touched, especially with her lifelong friend and partner in crime, Dixie Schmit. Special thanks to Colleen's hospice team: Vicki, Sue, Nathan and Sharon. Your help and support was invaluable in the final weeks of Colleen's life. Funeral services will be held at the Catholic Church of St. Peter in Richfield, MN with funeral mass at 3:00PM with a visitation one hour before. Luncheon to follow the conclusion of mass.

Colleen "Colly" Booth, 77, passed peacefully in Bloomington on Wednesday morning, December 15, 2021 with her daughters by her side. She is preceded in death by longtime partner, Daniel Prziborowski; parents, Thomas and Bonnie Quinn; sisters,... View Obituary & Service Information

The family of Colleen Renee Booth created this Life Tributes page to make it easy to share your memories.

Send flowers to the Booth family.