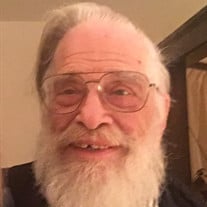 Charles Edward Grubb was born February 5, 1937, in Quincy, Illinois. But he would prefer to be remembered as a boy from Missouri, more specifically, the small town of Hunnewell, the place his family have long called home and where he and his younger brother, Norman, were raised by mom and dad Helen Louise (Feldkamp) Grubb and George Edward Grubb, a large extended family, and friends whose connections went back so many generations they were considered family. Indeed family was the most important thing in his life. The stories of his people gave his life shape and meaning. He learned of life beyond Hunnewell from books, and as a child he read endlessly. It became a lifelong habit. (Books were sacred things to him. All the rest of his life, wherever he lived, whenever he moved, the bookcases went first, and other furniture was somehow wedged in around them.) He went on to college, where he became a teacher, earning a bachelor's degree from Northeast Missouri State Teacher's College (now Truman State University) and a master's degree in sociology from The University of Missouri in Columbia. He taught high school for a short time before becoming a professor at Southern Illinois University, Edwardsville, and then found his adoptive home on the prairies of southwestern Minnesota, teaching at Southwest State University in Marshall. He taught there from 1970 until his retirement in 1997. He touched the lives of uncounted students there through his teaching, his activism, and his friendship. Charles was married to Capi Fishleigh from 1959 to 1964. They had two daughters, Lael (Phillip) and Sara. In fatherhood he found his ambition: He always wanted to be a better father than the day before. Lael made him a grandfather, with first Kathryn and then Matthew, another job he loved. His second marriage was to Marilyn Leach from 1966 to 1980. They had a daughter, Rachel (Kevin), and a son, George (Rachel). From them he got four more grandchildren, Rachel's son, Joseph, and George's children, Hannah, Charles, and Nicholas. He married a third time in retirement to Debra Franklin, but moved to Minneapolis in 2002 and lived alone the rest of his life. He found great solace in long conversations with his friends, in his daily reading and writing, and most of all in his family. Charles was a good cook, a terrible housekeeper, a great teacher, and a principled man. He was preceded in death by his parents, his brother, his first wife, and many great friends. He would hope that if he has a legacy, it is one of helping his fellow human beings in whatever way he could. And if he could choose the way he would be remembered by his friends, it would be in simple fellowship-sitting at a table with a cup of coffee and some good food to be shared, telling stories late into the night. A memorial gathering will be held in the spring in Minneapolis. In lieu of flowers, gifts to the ACLU or The Southern Poverty Law Center would be appreciated.

Charles Edward Grubb was born February 5, 1937, in Quincy, Illinois. But he would prefer to be remembered as a boy from Missouri, more specifically, the small town of Hunnewell, the place his family have long called home and where he and his... View Obituary & Service Information

The family of Charles Edward Grubb created this Life Tributes page to make it easy to share your memories.

Send flowers to the Grubb family.