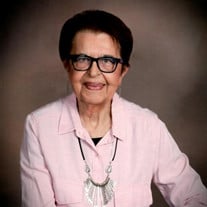 Carol Ann Hengel, age 81 of Bloomington, passed away on December 31, 2021. She was preceded in death by her husband, Charles; her parents, Andrew and Angeline; a brother, Andrew; and her sister, Susan. She is survived by her daughter, Kathryn (Walter) Newcomb; her sons, Charles (Cynthia) and John (Megan); her 6 grandchildren, Julia, Elena, Michael, Benjamin, Margaret, and Lauren; her brother Jack (Debbie) Lipinski; and many other relatives and friends. Carol was born on March 29, 1940, in Winona, Minnesota. She attended Catholic elementary school and Cotter High School. She graduated with highest honors from the College of St. Teresa in 1962 with a degree in English. In 1978, Carol earned her master's degree from the College of St. Thomas, a notable accomplishment as the college became coeducational in 1977. From 1974 to 2005, Carol was a high school teacher in the Bloomington Public Schools. During this time, she touched countless lives through her tireless advocacy for her students and her dedication to the teaching profession. After her retirement, Carol stayed connected to the schools by routinely walking on the track at the Jefferson Activities Center and meeting regularly for lunch with her retired teacher friends. Carol was past club president of the Bloomington Lions Club and a recipient of the Lion of the Year in 2010. Up until her death, she served as the club secretary, a position she held for more than 20 years. Carol took great pride in her membership in the Lions Club and epitomized the Lions motto "We Serve". She played a significant role in keeping the club in order and it will be difficult to replace her. In addition to helping others through her leadership and service in the Lions Club, Carol enjoyed reading, shopping, traveling, and spending time with her family. She also loved to walk the trails at Normandale Lake Park and kept a close count of her steps covered daily. Carol was a loving and caring wife, mother, grandmother, sister, aunt, and friend. She will be greatly missed by all that knew her. A Mass of Christian burial will be held at 11 a.m. on Friday, January 21 at The Church of St. Edward, 9401 Nesbitt Avenue South, Bloomington. Visitation will be one hour prior to the Mass at the church. Interment will be at Resurrection Cemetery in Mendota Heights following Mass. A reception will be held starting at 1:00 p.m. at David Fong's Chinese Restaurant, 9329 Lyndale Avenue South, Bloomington.

Carol Ann Hengel, age 81 of Bloomington, passed away on December 31, 2021. She was preceded in death by her husband, Charles; her parents, Andrew and Angeline; a brother, Andrew; and her sister, Susan. She is survived by her daughter, Kathryn... View Obituary & Service Information

The family of Hengel, Carol Ann (Lipinski) created this Life Tributes page to make it easy to share your memories.

Carol Ann Hengel, age 81 of Bloomington, passed away on December...