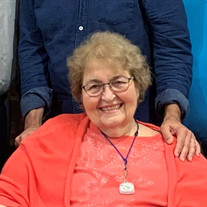 Carol Ann (Strawhecker) Ansolabehere passed away peacefully on Friday February 25 at the age of 85. A resident of Minnetonka, MN, she was born in Sacramento, California. There, while taking a junior college class in drafting, she met Jean Maurice Ansolabehere, the son of a Basque immigrant shepherd. After they had dated for a few months, Jean Maurice was drafted and served in the US military dismantling nuclear warheads. Carol waited for the charming Maurice to return, and they were married in 1958, soon after he served his tour of duty. Carol and Jean Maurice had five sons in the span of six and a half years, a feat worthy of a medal. Joseph, John, Stephen, Paul, and Louis were not always as saintly as their namesakes, but they were always a source of great pride for Carol. Carol and Jean Maurice moved many times with their young family as Jean Maurice went back to school to earn a doctorate in education, including stops in Los Angeles, CA, Detroit, MI, Champaign, IL, Sacramento, CA, Reno, NV, Big Rapids, MI, and Woodstock, IL. Carol was ever supportive, nurturing what would become an extremely close-knit family of boys. The family lost John to a car accident in 1980, a loss that Carol carried the rest of her life. Carol was a font of creativity and creative activities, from quilt-making to folklore to gingerbread house making. She had trained to be a cartographer and worked for AT&T making phoneline maps. Once the boys were in the teens, she got her real estate and appraising licenses and worked as an appraiser, later she worked as a tax advisor. She loved people and loved telling stories. Stories guided her life. Carol was very in love with her grandchildren and took a large interest in their activities, she went to ballgames, scouting meetings, campouts, concerts, plays, and always wanted to talk on the phone with them for hours. They were her treasures in her life and told everyone she came across about them and their adventures. Even as her health declined, Carol maintained an incredibly upbeat attitude. Her secret was the stories she told about her life, they were her very own folk wisdom. Today, we are counting our blessings, just as Carol counted hers. She is survived by Jean Maurice the love of her life, her four sons and daughters-in-law, ten grandchildren, six greatgrandchildren with one more on the way, two sisters-in law, and many nieces and nephews. Services will be 11AM, Saturday, March 5th with visitation one hour prior at: Washburn-McReavy.com Strobeck Johnson 952-938-9020 1400 Mainstreet, Hopkins

Carol Ann (Strawhecker) Ansolabehere passed away peacefully on Friday February 25 at the age of 85. A resident of Minnetonka, MN, she was born in Sacramento, California. There, while taking a junior college class in drafting, she met Jean Maurice... View Obituary & Service Information

The family of Carol Ann Ansolabehere created this Life Tributes page to make it easy to share your memories.

Send flowers to the Ansolabehere family.