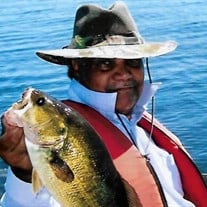 Carl Edward Bradley, Sr. was born in Lufkin, Texas on October 15, 1948. Adopted by maternal relatives, he grew up in Minnesota and attended Central High in Minneapolis (Minnesota's first desegregated high school). His academic and athletic excellence resulted in college scholarship offers, which he declined in favor of a promising musical career. Carl went on to record songs with bands such as Dave Brady and the Stars and Danny's Reasons. He played at venues across the U.S. with legends Jimi Hendrix, Janis Joplin, Jim Morrison, and others. He was inducted into the Mid-America Music Hall of Fame five times. While he remained an active part of the music scene throughout his life, Carl also developed a passion for golf and fishing, learning pro secrets from some of the fishing celebrities of his day. Always ready with a smile or joke, he was loved and admired wherever he went. Despite his many achievements, though, Carl claimed his children were the greatest accomplishment of his life. Throughout it all, he loved the Lord, studied his Bible, and remained steadfast in his faith. On April 1, 2022, Carl left his earthly suffering for the arms of his Savior. Even in his final hours, he was surrounded by family and friends. He is survived by Debbie Fox, his life partner of several decades; children, Patrice Doten, Daryl LaBat, Joseph Huber, Carl Bradley, Jr., Andrea York, Galen Kruger, Scott Wesolowski, Jason Spangler, Nicole LaNasa, Terra Dodds, Hunter Boyce, Anthony Longen, and Jesse Bradley; numerous grandchildren; one great grandchild; and many wonderful friends. Though we mourn his absence, the song of Carl's life plays on in our hearts. A private funeral is planned. However, the service will be live-streamed and available for viewing at approximately 2:00pm on Saturday, April 16th (and anytime after). Memorials can be made at https://gofund.me/129d7cd7 and are preferred in lieu of flowers. Washburn-McReavy.com Glen Haven Chapel 763-533-8643

The family of Carl Edward Bradley created this Life Tributes page to make it easy to share your memories.

Send flowers to the Bradley family.