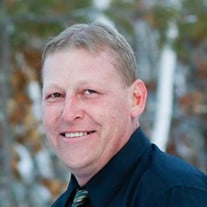 Bruce Christopher Donnell, age 47 of Spring Lake Park, passed away peacefully at home surrounded by his loving family after a courageous battle with cancer on January 23, 2022. Born June 22, 1974 in Fosston MN. He belonged to St. Joseph's Catholic Church, Beaulieu MN where he was baptized and confirmed. He attended St. Michael's Catholic School, Mahnomen MN through 6th grade. Graduated from Mahnomen High School. Attended Thief River MN Aviation training. He later worked for Vigen Construction building grain elevators in Grand Forks MN. As a child he enjoyed Boy Scouts, riding his bike all over the Beaulieu area being with the neighbor kids. He ejoyed swimming in the river and riding three wheelers. Bruce was an avid fisherman, woodworker, and hunter, on his last hunting trip he was proud to see his youngest daughter get her first deer. He started his own company which he was very proud of, Yard Addix where he made outdoor board games. Bruce lived for his family, his wife and daughters were the most important thing in his life. Most recently he was working for Asplundh Tree Care Services as an arborist and the foreman. He was a proud member of the Union for 20+ years he even served as the Union Steward. Bruce spent many weekends with friends and family enjoying his camper at Pathfinder. He was preceded in death by his father, Richard Donnell; brothers, Tommy and David, sister Karen Blumberg. Bruce will be deeply missed by his loving wife of 8 years, Judi Heston; daughters, M'kenzy Larson, Kallie Larson, Grace Larson; mother, Marge (Maruska) Donnell; siblings, Darrell (Melissa) Donnell and Diane (Rich) Schultz; nieces, nephews, many other loving family, and friends. Mass of Christian Burial will be held on Friday January 28, 2022 at 11 AM with visitation at 10:30 AM at St. Timothy's Catholic Church 707 89th Ave NE, Blaine. Visitation will be held Thursday January 27, 5-8 PM at Washburn-McReavy Columbia Heights Chapel, 4101 Central Ave. NE, Columbia Heights. In lieu of flowers, memorials preferred.

The family of Bruce Christopher Donnell created this Life Tributes page to make it easy to share your memories.

Send flowers to the Donnell family.