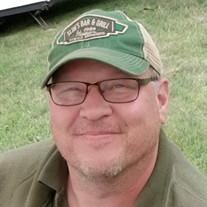 Brooks Philip Henderson, age 53 of Hanover, MN passed away on Dec 3, 2021. Preceded in death by dad, Philip W. Henderson. Survived by wife, Melissa; Brooks' daughter, Kyla (Kyle) Hoisington; step-children, Abigail & Emerson Whittemore; mother, Ann Louise Henderson; sister, Beth (Bill) Hall; nieces, Lauren, Jill, & Becca Conrad; favorite hunting buddy, Cain. Brooks was born August 14, 1968 in Duluth, MN. He attended Armstrong High School and went on to graduate from Bemidji State University in 1992. Brooks was a devoted father and step-father to 3 amazing girls. He was proud of their accomplishments and the addition of his son-in-law in 2019. He was an avid hunter and loved to spend time flushing birds with his black lab Cain. His other favorite pastime was Tuesday night dog training sessions with his buddies, their dogs and a couple beers. Brooks was a quiet observer who kept his emotions tucked away until it involved family; then he wore his heart on his sleeve. He was a collector of many things and believed everything had value. Laid back and easy to please, he found joy in a beer on the deck, smoking meats, Sunday morning coffee with Melissa, time spent with his girls, training dogs, his freshwater fish tanks, Fall grouse camp and wandering around Fleet Farm. Brooks left this life like he lived it...quietly, peacefully and deeply loved. In lieu of flowers memorials preferred. Family requests everyone to wear masks. Service is 11AM, Saturday, Dec 18 with visitation one hour prior at: Washburn-McReavy.com Glen Haven Chapel 763-533-8643 5125 W Broadway, Crystal

The family of Brooks Philip Henderson created this Life Tributes page to make it easy to share your memories.

Brooks Philip Henderson, age 53 of Hanover, MN passed away on...

Send flowers to the Henderson family.