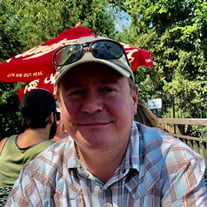 Our beloved Brian, 47, left us on October 4, 2021. There are no words that can describe how much that hurts or how hard it is to imagine our world without him. He was our person and our heart. Brian was born on October 11, 1973 to Kelly and Dianne Engelstad in Crookston, MN. His childhood involved a lot of motor bikes, a lot of fishing, hunting, skiing and what can only be called "shenanigans" with friends in Crookston and on Union Lake, where his parents had a cabin and eventually moved to. He graduated in 1992 and took the adventure onto Mankato State University. He initially studied nursing but changed course and went into IT and graduated from the University of Minnesota, Crookston. Work and life brought Brian to Minneapolis, where he would later meet his future wife, Jessica. They met in 2001 at Brothers in Minneapolis when she walked by him and said, "I am going to go dance. You can come too". They lived in Richfield for a period of time before settling in Eden Prairie. He gave the world three beautiful babies that brought him incredible joy. He joked before Ryley was born that he had never even held a baby but took to fatherhood like a duck to water. He shared his love of the outdoors, hockey and funny jokes with them, never missing a chance to coach their hockey teams, to help them ride bikes, go for walks, play in the snow or let them use whatever tool they had their eye on, much to chagrin of Jess at times. He loved to buy the newest gadgets for them whether it was hover boards, laser tag rifles or water guns because he liked playing with them just as much as they did, if not more. They will walk through life's milestones and miss him. Birthdays, holidays, graduations, weddings. Hopefully they will feel him on those days and know how much he loved them. He loved hard and generously and if you were his friend, you were his friend for life. He spent many hours on the phone, talking about anything and everything with them. He loved to talk and no one was a stranger to him for very long. He was the first person to offer to help when you needed it and knew how to fix just about anything and had the right tool for any occasion. His big heart spread to his pets who he treated as if they were also his babies. You could usually find him snuggled up to one or two dogs, petting a cat or making sure the hummingbirds were welcomed in the backyard, He got such a chuckle over watching the cats play around the house late and night and would regale Jess with their adventures the next morning more than likely including a few pictures to capture the moment. Those who will forever be blessed to have been loved by him include his wife of 17 years, Jess, three daughters that adored him, Ryley, Sydney and Kinsley. His brother, Scott, and Sister-in-Law, Trish along with their children, Sean and Lucy. He is also survived by many Aunts, Uncles and Cousins that he loved to share childhood memories about. He is also survived by his loving in-laws, Sue, John, Jeremy, Sara and Jim and their sons, Greyden and Logan. His close friends are too many too list but to not mention those that were apart of so many memories and were a constant in is life seems wrong. Eric, Shawn, Jeremy, Trevore, Mike, Darin, Bergy, Tracy, Steve, Todd and Potsy...you were more than friends to him. You were his brothers. He was welcomed into heaven by his Mom and Dad who were his rock and his sounding board not only on Earth but after. His many beloved pets, Chase, Bullet, Shelby, Sam and Blue, were no doubt part of the welcome as well. We will celebrate the life of Brian on October 11, 2021, what would have been his 48th birthday, at St. Andrew's Lutheran Church in Eden Prairie. Visitation will be at 10 am, a funeral service will begin at 11 am followed by a lunch at the church. A small get together will be held at his favorite hockey stomping grounds, the American Legion in Chanhassen following the lunch.

Our beloved Brian, 47, left us on October 4, 2021. There are no words that can describe how much that hurts or how hard it is to imagine our world without him. He was our person and our heart. Brian was born on October 11, 1973 to Kelly and... View Obituary & Service Information

The family of Brian Albert Engelstad created this Life Tributes page to make it easy to share your memories.

Send flowers to the Engelstad family.