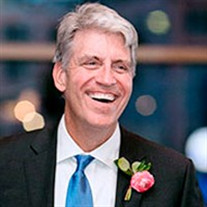 Blackey, Brent G. Age 63 died peacefully at his home in Shorewood after a courageous battle with pancreatic cancer. Survived by loving wife, Karen, children Erika (Steve) Dwyer, Adam (Cecily) and Jennifer (Tom) Milne; grandchildren Addison, Thomas, Brooks and James; siblings Georgia (Jeff) Cole and Gordon Blackey; nieces, nephews, and many beloved friends. Preceded in death by parents, George and Rosemarie Blackey, and brothers Bruce and Brian Blackey. Brent was raised in St. Anthony, Minnesota, where working at Blackey's Bakery in Northeast Minneapolis provided an early grounding in family-owned business. After graduating from St. Anthony High School class of 1976 (where Brent was inducted into the hall of fame), Brent attended the College of Saint Thomas and played basketball before transferring to the University of Minnesota where he graduated with a bachelor's degree in Accounting. He began his career with Arthur Andersen & Co., ultimately becoming a partner in the firm. When Arthur Andersen ended, Brent moved to Ernst & Young, serving again as a partner with the firm. His longtime client, Holiday Companies, privately owned by the Erickson family, approached him in late 2004 and asked to join them, serving as President and Chief Operating Officer. Under Brent's leadership, the company grew and prospered, culminating in its sale in 2017. During his career, Brent also served on several corporate boards, which he stayed active with after retiring from Holiday, as well as serving with the University of Minnesota Carlson School Board of Advisors. Brent met Karen, the love of his life, in 1975 and married in 1981. Karen and Brent raised their family of three children in an environment of love and encouragement. Brent was an active and involved dad, always making time to coach their sports teams, help with homework and support all their dreams. Through 40 years of loving marriage with Karen, they showed their kids and many others what love and mutual support look like. Brent often said how much he enjoyed living a great life. A devoted husband and father, a loyal friend, and a trusted advisor and mentor to many in the business world, Brent lived with enthusiasm and zest. Some of his favorite activities included traveling, golfing, dining out at restaurants and attending every Minnesota State Fair for 60 years. He was also a faithful fan of the Vikings, Wolves, Twins, Wild, and everything Golden Gophers. In the more recent years, Brent and Karen enjoyed many special moments at their Lake Minnetonka home as well as their second home in North Scottsdale, Arizona. Both places were popular for the family to gather and there are many cherished memories there with Brent, whether it be time out on the boat, hiking some of his favorite mountain trails or having a meal at one of his favorite spots. Brent was a happy and outgoing person who loved to laugh, lead, and be a positive influence. He leaves behind a legacy in the impact he made on the people who knew him. Family, friends, business associates, and many others. We will hold him in our hearts forever. We want to especially thank all care givers from Abbott Northwestern Virginia Piper Cancer Center, Honor Health in Scottsdale, Arizona, Dr. Tod Worner as well as all friends who took him to appointments and infusions over the past 16 months. In lieu of flowers memorials preferred to continue the research to improve the odds with this horrible disease. Abbott Northwestern Hospital - Allina Health (Virginia Piper Cancer Center) and HonorHealth Foundation, honorhealthfoundation.com For checks- HonorHealth Foundation IMO Brent Blackey 8125 N. Hayden Road Scottsdale, AZ 85258 Direct to: HRII Pancreatic Cancer Research Visitation Thursday, June 16th, 5:00-8:00 pm at Washburn-McReavy (5000 W 50th St, Edina 55436)24). Funeral Service Friday, June 17th, 11:00 am followed by luncheon at Mount Calvary Lutheran Church (301 County Road 19, Excelsior 55331) washburn-mcreavy.com Edina Chapel 952-920-3996

The family of Brent Gerard Blackey created this Life Tributes page to make it easy to share your memories.

Send flowers to the Blackey family.