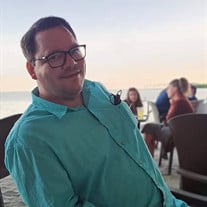 Brad Ellsworth, age 40 passed away unexpectedly on February 12, 2022, from a heart attack. Brad was born in Watertown, SD on February 7, 1982 to Steven and Paula Ellsworth. He graduated from Mobridge High School in Mobridge, SD and was also a graduate of Inver Hills Community College. He obtained his Bachelor's Degree in accounting from the University of Minnesota. He met the love of his life, Jael, eighteen years ago and they got married in 2005. Brad and Jael have two beautiful daughters who he called his "little ladies". He was extremely proud of his family and his world revolved around them. He was a wonderful husband, father, son, brother, grandson, coworker, and friend. Brad was an anomaly. He was dedicated to his work with AFSCME Council 5. The recent promotion he received as Finance Director was an honor and something that he took much pride in. He had such a wealth of knowledge on all topics and could present them in such an interesting, vivid, and profound way. He made friends everywhere he went and had the ability to connect with people from all walks of life, and everyone was welcome at his table. You would often hear him say, "Have I ever told you...", "I know a guy..." or "I have a buddy...". He was authentic, practical, and always true to himself and others. His sense of humor was truly one of a kind. He could find the positive in any situation. He was fixer, both in his personal and professional life and his ability to find resolutions was uncanny. He was loved by all who were lucky enough to cross his path, of which he had many. His favorite thing to do was spend time with his wife and daughters. They loved swimming in their pool, traveling, and playing board games. He leaves behind to cherish his memory his wife, Jael Ellsworth, his daughters Annabelle and Emma Ellsworth of Rosemount, MN; mother, Paula Mitchell Ellsworth of Clearwater, FL; grandmother, Ila Mitchell of Summit, SD; brother, Ben Ellsworth (Laura Simmons) of Redwing, MN; brother-in-laws, John Ratey (Shannon) of Hovland, MN; Lenny Hickman (Stephanie) of Newton, AL; along with several aunts, uncles, cousins, nephews, extended family, and friends. He is also survived by his kitty Paco whom he adored and spoiled. He was joined in death by his father, Steven Ellsworth. He is preceded in death by his grandfather, Paul Mitchell and his uncles, Dave Schmeling and Dennis Mitchell. In lieu of flowers, memorials can be sent to a savings account in the name of Annabelle or Emma Ellsworth at Vermillion State Bank.

Brad Ellsworth, age 40 passed away unexpectedly on February 12, 2022, from a heart attack. Brad was born in Watertown, SD on February 7, 1982 to Steven and Paula Ellsworth. He graduated from Mobridge High School in Mobridge, SD and was also... View Obituary & Service Information

The family of Brad Alan Ellsworth created this Life Tributes page to make it easy to share your memories.

Send flowers to the Ellsworth family.