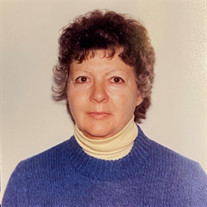 A tribute to Bonnie Kirchner. Bonnie lived an extraordinary, adventurous life during her 94 years on Earth. With her beginning at birth, Bonnie Perfetto arrived April 20, 1927, in Winnipeg Manitoba Canada, and departed on the Wings of Angels, Christmas Eve, December 24, 2021, in Edina, Minnesota. It is only right to commend her achievements as a progressive woman at a time when it was rare for women to attain higher ranks of education. With her strong desire and incredible intellect, education was a definite priority and goal. The fact that her accomplishments reached beyond "the normal of women" during the 1950's is astonishing. On June 19, 1949, Bonnie completed her first Bachelor of Arts Degree at the University of Minnesota. In pursuit of her passion of law, she began law school at the University of Minnesota and in June of 1952 received her Bachelor of Law Degree. In October 1952, The State of Minnesota and The Minnesota State Bar Association awarded her Certificate to practice law. Her choice of law led her to a Certification from the United States Department of Justice, Board of Immigration Appeals, Washington D.C. practicing in immigration appeals and immigration and naturalization law. Her career path led to meeting Wayne Kirchner, Ph.D. who soon became a soulmate to Bonnie. Their romance grew with inspiring and combined interests. At the age of 28 she joined Wayne in Cambridge England where he was a Fulbright Scholarship student. On April 16, 1955, Bonnie and Wayne were united in marriage at Cambridge England. Together their curiosity of cultures made way for excursions around the world. Her many photo albums meticulously document each adventure. Bonnie was a connoisseur of the arts, including her vast book collection, several detailing the great masters. Her energetic love of learning was always evident in conversation. Bonnie and Wayne celebrated their 52 married years together before his death. In her later years Bonnie continued to be curious, up to date on current worldly affairs, well read and often shared her own history, wisdom, and kindness plus a gentle smile.

A tribute to Bonnie Kirchner. Bonnie lived an extraordinary, adventurous life during her 94 years on Earth. With her beginning at birth, Bonnie Perfetto arrived April 20, 1927, in Winnipeg Manitoba Canada, and departed on the Wings of Angels,... View Obituary & Service Information

The family of Bonnie Lorraine Kirchner created this Life Tributes page to make it easy to share your memories.

A tribute to Bonnie Kirchner.
Bonnie lived an extraordinary,...

Send flowers to the Kirchner family.