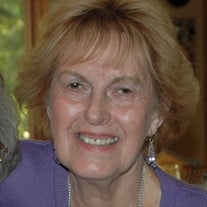 Beverlye A. Pesely On the evening of April 16, 2022 Beverlye passed away peacefully after a 15-year battle with Alzheimer's disease. She was a resident of Flagstone Care Center in Eden Prairie, Minnesota where she had exceptional care from the staff and Park Nicollet hospice 'angels". Beverlye was 92 years old. Beverlye A. Pesely (nee Carl) was born in Harvard Illinois on October 21 or 22. The date was always a matter of question as she was born at midnight. Harvard was a fertile corn growing land with railroad industry. She was the second child of Wayzetta and Cecil E. Carl and sister to Cecil L. Carl. Beverlye was a dedicated hard worker, working for most of her life. Even after her disease began, she knew she could still hold down a job and applied for over 10 positions. Work was important to her. Wherever she worked, she inspired a great work culture with her attention to detail, initiative, leadership skills and devotion. Her greatest strength was that she was a "people person", making friends with co-workers, customers and anyone who came into her life. At one point, she oversaw 75 employees in a 150 seat restaurant with a 325 seat show lounge. Over her career, Beverlye worked in retail sales, food and beverage management and sales consulting. Beverlye was fiercely devoted to her family, and chose to live close to them. In her younger years, she lived in LaGrange, Illinois near her daughter and parents. As her parents aged, she moved with them to Delavan, Wisconsin where her daughter and family resided. Following the passing of her parents, Beverlye moved to Minnesota once again to be close to her daughter, Grandchildren and Great grandchildren. Her interests were many: motorcycle rides, boat rides, fishing, hot air balloon rides, traveling to Vegas with best friends Deedee and Gubby to see shows and play the penny slot machines, knitting, reading, listening to music (mostly Yanni, Johnny Mathis, and Elvis), drinking hot tea with a lot of milk, mimosas or a small split of champagne. Beverlye was passionate about all animals (except snakes!). She was known to rescue dogs. She also had favorite animals that she visited regularly...one being a white buffalo and another a big male turkey. This gobbler would meet her red car as she was entering the farmer's driveway, stay with her and dance for her continuously until he followed her out the driveway...much to the farmer's surprise. One could say she was a "cat lady" as she so loved them and had multiple fur babies through out her life. Those who knew Beverlye remember her to be a lady who presented herself very well-always well dressed and "put together". She had a big smile and even bigger heart for those she met. However, she was no push-over, never afraid to share her opinion and stand up for what she believed. Beverlye was preceded in death by two husbands, her parents and brother Cecil (wife Elaine and daughter Judy). She is survived by daughter Anna R Fitzsimmons, son in law Pat, Grandson Carl B Fitzsimmons, Granddaughter Cecilee A Oste and Grandson in law, Michael. Along with Great Grandchildren Quinlyn, Noah, Maesen, Kegan, Wesley and Annie, and Neice Linda Carl. There will be a private burial ceremony in Aurora, Illinois this summer

Beverlye A. Pesely On the evening of April 16, 2022 Beverlye passed away peacefully after a 15-year battle with Alzheimer's disease. She was a resident of Flagstone Care Center in Eden Prairie, Minnesota where she had exceptional care from... View Obituary & Service Information

The family of Beverlye Anne Pesely created this Life Tributes page to make it easy to share your memories.

Send flowers to the Pesely family.