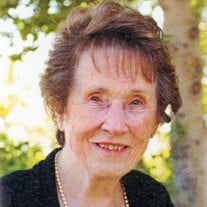 Beverly (Bev) Davis was born January 4, 1933 to Kenneth and Myna Kenely in Mora, MN. She graduated from Mora High School and went to work for Minneapolis Moline. Met Ron Davis at a dance in 1950 and it was love at first sight. They were married on September 19, 1952 while Ron was on furlough and returned to California where he was stationed in the US Army. After raising 5 children and they were all in school, Bev returned to school herself and got her AA degree in accounting at Anoka Ramsey Community College. Upon graduation she was immediately hired to manage the book store at ARCC and worked there until her retirement in 1995. Bev was a member of Coon Rapids United Methodist Church since Mother's Day 1957. She was very involved in many aspects of the church including Financial Secretary, sang in the Chancel Choir, cooked many Spaghetti Dinners and Easter Breakfasts, assisted in catering Weddings, cooked for many a Solid Rock Mission trips and folded piles of clothes for their garage sales. She was very involved with the building committee in designing the kitchen. Her greatest love and passion was serving dinners at Funerals for 27 years. She loved her family and enjoyed any gathering together. Just 5 years ago she went to Ireland to visit her ancestry. She was very active until Covid came and shut down visiting. This drove her crazy so the family started Friday night dinners. It was always a surprise to her what was going to be for dinner. She loved to sit and listen to the family banter and laughed at their antics. Up to the very end even though she could not communicate she would still laugh and grin. Every day her routine was to do both crossword puzzles in the Star Tribune. Then to pass time she started doing jigsaw puzzles and went through many puzzles until she came to the Butterfly puzzle. This puzzle broke the master. Age 89 of Blaine, died peacefully with family surrounding her on February 25, 2022. Survived and loved by her children Ray Davis, Kari Stilson, Ronelle Davis, Russ (Cindy) Davis and Louise (Gerry) Borntrager; her grandchildren Anita (Matt) DeMay, Jacob (Elizabeth) Davis, Krista (Ivan Guarin) Stilson Guarin, Jodi (Chris) Bowtell, Lena (Scott Wiggins) Fan, Karl (Jenna) Herschberger, Sarah (Will) Manilov, Sean (Rachel) Keenan, Haley Keenan, Bill Keenan, Gina Borntrager, Garret (Christina) Borntrager, and Amy Chapman; her great-grandchildren, Ashley DeMay, Evelyn & James Davis, Luca, Milo, & Niko Guarin Stilson, Laura & Claire Bowtell, Claudia Wiggins, Alex Herschberger, Lukas & Kaleb Manilov, Elsie Keenan, J.D. & Paige Chapman, and Shaylee Borntrager; many nieces and nephews. Proceeded in death by her loving husband Ronald Davis, parents Kenneth and Myna Kenely; her brother Stacy Barker and sisters Virginia Harris, June Stegeman, Shirley Clark; and daughter-in-law Lynn Davis and son-in-law John Stilson and great-grandson Jason Stilson.

Beverly (Bev) Davis was born January 4, 1933 to Kenneth and Myna Kenely in Mora, MN. She graduated from Mora High School and went to work for Minneapolis Moline. Met Ron Davis at a dance in 1950 and it was love at first sight. They were married... View Obituary & Service Information

The family of Beverly Ann Davis created this Life Tributes page to make it easy to share your memories.

Send flowers to the Davis family.