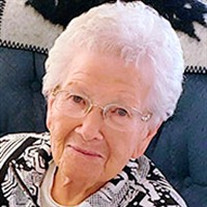 Digre (Hoversten), Bernice Elvina April 9, 1924 to February 9, 2022 Bernice Elvina Hoversten Digre died February 9th, 2022 at her home in Prior Lake, Minnesota with all her children at her side. Bernice was born April 9th, 1924 at her family farm in Lynd, Minnesota to Martha and Elias Hoversten. She graduated valedictorian from Minneota High School. She enrolled in the Cadet Corp and received her RN from Augsburg College & Lutheran Deaconess Hospital in Minneapolis. While working as a nurse at the hospital in Hendricks, MN she met the love of her life, Clifford Digre, and they were married in 1947. Bernice worked as a nurse until she had children. In 1949, she and Cliff started MISCO as a speaker reconing service and drive-in theater speaker manufacturer. She did all of the book keeping and eventually became the chief financial officer. Today, under the direction of Bernice's son Dan, MISCO serves international markets and is a leading manufacturer of loudspeakers and audio equipment in the United States. She retired as CFO in July 2021. Bernice was a 50-year member of St. Luke's Lutheran Church and served numerous funerals and church functions. She is a member of Bethlehem Lutheran Church. Bernice and Cliff were married for 65 years and lived in the Fulton neighborhood for 47 years where their four children all graduated from Southwest High School. They moved to Prior Lake in 2003. Bernice's pride in her Norwegian heritage and her steadfast Lutheran faith influenced her life. She expressed her love through cooking, caring for children and grandchildren, and exuding kindness and warmth to everyone, everywhere. In the last 10 years of her life, she traveled to Utah, Alaska, California, Colorado, Wyoming, Arizona, Florida and Washington; joined a virtual book group in Utah; attended concerts, plays, operas, musicals, and baseball games; and hosted the 60+ club and numerous gatherings at her home on Prior Lake. She is preceded in death by her husband Clifford Digre, her father Elias Hoversten, mother Martha Johannessen Hoversten, brothers Knut, Joseph, Emanuel, Clarence, Chester, Kermit, and sisters Christine, Ellen, Clara, Emma, and Esther. She is survived by her four children Kathleen Digre (Michael Varner), Rolland Digre (Patti Arntz), Daniel Digre (Luz Paz), Carrie Murphy (Chad); her grandchildren Johanna Varner (Thomas Walla), Gita Varner, Peder Digre (Tom White), Neal Digre, Cali Digre, Jordan Prescher (Mark), Joshua Murphy, Amy Stepan (D.), Ann Aho (Jeremy), Melani Schwartz (Alexis Larson) and Kyle Schwartz; and great-grandchildren Emma Prescher; Kaleb, Landon and Karlee Aho; Sabriel, Sebastian, Alexander, Aurelia, and Quentin Stepan; Aiden and Annika Walla. She is also survived by brothers Garfield and Vincent (Marge) Hoversten, her sister-in-law, Ruth Hoversten, her many nieces and nephews, friends, and the Scouts. The family is grateful for all of her caregivers and for all of the loving thoughts and prayers from family and friends across the world. Interment was at Lakewood Cemetery after a small family gathering. A celebration of her life is planned for the summer. In lieu of flowers. memorials would be preferred to Hemnes Lutheran Church (the Hoversten family church and cemetery in Minneota, MN), Hendricks, Hospice (Hendricks MN where Bernice worked as a nurse), or Habitat for Humanity. Washburn-McReavy.com Edina Chapel 952-920-3996

Digre (Hoversten), Bernice Elvina April 9, 1924 to February 9, 2022 Bernice Elvina Hoversten Digre died February 9th, 2022 at her home in Prior Lake, Minnesota with all her children at her side. Bernice was born April 9th, 1924 at her family... View Obituary & Service Information

The family of Bernice Elvina Digre created this Life Tributes page to make it easy to share your memories.

Send flowers to the Digre family.