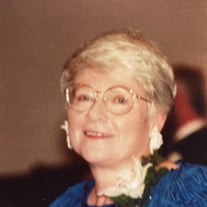 Bernie McCarthy passed from this life on Christmas morning. She will be dearly missed by her family and friends, yet we are rejoicing that because of her faith in Jesus, her new life in Heaven is just beginning. As her health failed in recent weeks, Bernie found great comfort in God's promise: "No eye has seen, no ear has heard, and no mind has imagined what God has prepared for those who love him!" 1 Cor. 2:9. Bernie was born in Argyle, MN and raised in Grand Rapids MN, where she met her husband of 58 years, Gene McCarthy, who was stationed in Grand Rapids while serving in the Air Force. They had 13 cross country moves before settling in Apple Valley in 1974. Together, they raised five children and delighted in their seven grandchildren. Bernie was a warm, fun, encouraging, welcoming, and faithful woman. She led a life of significance, using the gifts God gave her and investing her time and energy loving and genuinely caring for others. She was a loving friend - hundreds have laughed and shared meals at her table. She was extremely generous - she saw needs and provided emotional, physical, and financial support to countless friends and strangers, even in her final days of life. She was a woman of strong faith - praying regularly with and for others. She had a grateful and optimistic spirit - as she and Gene encountered illness and physical challenges in later life, she made the most of what they could do rather than lament what they could no longer do. Her choice to focus on God's goodness and promises allowed them both to enjoy a good quality of life despite their limitations. Bernie was preceded in death by her husband, Gene, parents Avelin & Lucy Lambert, and son-in-law John Osterberg. She is survived by her children, Patty (Pat) McKenzie, Cathy (Rob) Wassenaar, Mary (Doug) Rhodes, Bob (Liz) McCarthy, Jim (Sally) McCarthy; and grandchildren, Mike (Sarah & great-grandchild Hallie) Osterberg, Tom (fiancé Shauna) Osterberg, Josh (Tracee) Wassenaar, Drew (Sandra) Wassenaar, Amanda (Grant) Kaper, Kelly Rhodes, and Abigail Rhodes. Memorial service will be held at 2PM with visitation one hour prior on Sunday, January 2nd, all at:

Bernie McCarthy passed from this life on Christmas morning. She will be dearly missed by her family and friends, yet we are rejoicing that because of her faith in Jesus, her new life in Heaven is just beginning. As her health failed in recent... View Obituary & Service Information

The family of Bernadette Marie McCarthy created this Life Tributes page to make it easy to share your memories.

Bernie McCarthy passed from this life on Christmas morning. She...

Send flowers to the McCarthy family.