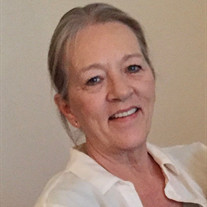 Barbara Gale Christensen, born May 22, 1953, in Minneapolis, MN, passed away peacefully on May 26th, just four days after her 69th birthday, following a long two year battle with leukemia. She grew up in Brooklyn Park, Minnesota, with her parents and four siblings, and married her high school sweetheart, Mark Christensen, on October 5, 1971, in the Fall after their graduation. During 50 ½ years of marriage, they created a beautiful family of their own that has grown from their love into the great family tree to which many belong today. Barb and Mark welcomed their first baby in 1972, a beautiful girl they named Tina Louise, and the love in their life expanded more than they imagined it could. In 1975, their second baby girl arrived, Tara Lee, with so much joy that another branch of their love began growing. Although, they must have needed a break for a while, because their next baby came much later in 1981 when they welcomed baby boy, Shaun Michael. A boy! What a proud day! But, they couldn't stop at an odd number of three, oh no. They made it an even bunch of four in 1982 when they announced the arrival of their baby, baby girl, Kala Marie. (Besides, Shaun needed a buddy.) Barb was an amazing mom and her gifts of motherhood flowed effortlessly. She stayed at home for the majority of the time raising her family and was grateful, as are we, she was able to do so. She was the kind of mom that played in the yard on sunny summer days and made snow angels and snowmen on winter days, too. She was always there with a hug, never any judgement, whenever you needed it. She'd tell you to "Be quiet" (not shut up) when you needed to be quiet. She passed on all that she loved to her children: music, playing piano, dancing around the house, ice skating, coloring, reading, birds, horses, butterflies and everything in between. There are so many songs she liked that when we turn on the radio, we think of her. In addition to being a wonderful mother who was always open to sharing anything, being truthful in what she said, and loving with open arms, she was an exceptional grandmother. She loved every single one of her 13 grandchildren and 3 great-grandchildren. She was there whenever you needed her, from a last-minute babysitter, to full-time daycare, or just a quick hug and visit. Every quote or saying you see written about a grandma's love, hugs, or house - those are what describe what a blessing of a grandma she was. She also did her own thing, not bound to the wants of others, sometimes stubbornly and frustratingly to her family, ever staying true to herself. What a wonderful woman! Times weren't always easy in life, and when they were tough, Barb was there to tell you "It's going to be all right", "It'll be fine", "You'll be fine". And she truly believed it. There was so much comfort when she said those words. Through all the cancer treatments, sickness, tiredness, and short hair, Barb never complained. When you asked her how she was doing, it was usually the same answer, "I'm fine," with a smile. Occasionally, there'd be a "This sucks" thrown in, but that would be it and on she went. We are so very thankful to have experienced her love and are grateful she was such a central part of our lives. She is survived by her loving husband, Mark Christensen; children Tina Bevins (Adam), Tara Dirkswager (Marc), Shaun Christensen (Stephanie), Kala Brittan (Josh); her mother, Shirley Amon; brothers, Gary Amon and David Amon (Rhonda); grandchildren Anthony Foley (Haley), Travis King (Alison), Chase King, Charlie Bevins, Donovan Bevins, Jordan Karnik, Gavin & Audrey Christensen, Tanner, Brayden, Isaac, Izaiah & Elsie Brittan; great-grandchildren Jackson & Riddick Foley, and Benson King; nieces and nephews; and many other family and friends whom she loved dearly. We take comfort in knowing she is reunited with the loved ones who preceded her in death: her father, Robert H. Amon; sister, Leslie Amon; brother, Craig Amon; mother-in-law, Georgia Christensen; father-in-law, Christian Christensen; cousins and others. Funeral service will be held Monday June 6th at 2:00PM at Elim Lutheran Church 3978 West Broadway Ave Robbinsdale, MN with a visitation at 1:00PM. Burial to follow at Glen Haven Memorial Gardens 5125 West Broadway Ave Crystal, MN. Memorials and flowers can be sent to Washburn-McReavy Glen Haven Chapel 5125 West Broadway Ave Crystal, MN 55429 (763) 533-8643

Barbara Gale Christensen, born May 22, 1953, in Minneapolis, MN, passed away peacefully on May 26th, just four days after her 69th birthday, following a long two year battle with leukemia. She grew up in Brooklyn Park, Minnesota, with her... View Obituary & Service Information

The family of Barbara Gale Christensen created this Life Tributes page to make it easy to share your memories.

Send flowers to the Christensen family.