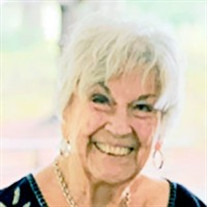 Cashman, Barbara Ann (nee Sensenbrenner) Age 97 passed away peacefully on December 4, 2021. Barbara was born on November 16, 1924, in Menasha, WI, to Rudolph M. and Barbara A. Sensenbrenner as the sixth of seven children. She graduated as valedictorian in 1942. She then boarded a train with a single suitcase and headed for the University of Minnesota in Minneapolis, where she started a new life. She graduated with a nursing degree in 1946, having chosen that path based on the recommendation of the girl in front of her in the registration line. Barbara assumed tremendous responsibility at a young age at the University Hospital, before she was swept off her feet by Charles Cashman, a returning veteran driving a convertible. They wed on April 3, 1948, and after moves to Duluth, MN, and Charles City, IA, settled in Owatonna, MN, and focused on their growing family. There was a new sibling on the way every year and a half, eventually totaling ten: Charles, Peter, Ann, Martha, Kristin, Matthew, Sarah, Michael, Noah and Mia. Barbara became a true super mom. She had an extraordinary ability to connect spiritually with her children, and everyone she met, and make each feel special. Thank goodness for the big clan. Led by Barbara they had countless adventures that made for a lifetime of wonderful memories. Barbara had a knack for attracting dear friends with her sincerity, warmth and humor. Everyone wanted to hang out at the Cashman home at 342 East Pearl Street. After launching her kids into adulthood, Barbara went back to school, obtained a second degree from the University of Minnesota in 1976, moved to Burnsville, MN in 1983 and thoroughly enjoyed a long encore career as a family chemical dependency counselor from 1976-1994. Barbara applied her keen understanding of people and saved families in crisis. Her life saving skills were no surprise to her own children or many friends, and she made many more lifelong friends in the process. Barbara relished being a grandmother, doting on her many grandchildren. She became "Mamoo" to them, a nickname she embraced even though she never understood how it originated. Barbara moved to Scottsdale, AZ, in 1998 to enjoy the sunshine and many friends who had made the move earlier. Of course, she made many more friends there. She met Frank Bradshaw, on the plane of all places, and they became partners until Frank passed away. In Arizona, Barbara focused on perhaps her two greatest passions after her family and friends: shopping and gardening. Her garden became a spiritual haven. Her shopping - well, Barbara was always a very classy fashionista and that never changed! In 2018, Barbara moved back to Edina, MN, where she continued making those she touched feel loved and special. She had the time and pleasure to spend time with all her children, grandchildren and friends. Barbara was as loving and full of wisdom as ever! She even made special relationships with her caregivers, who were wonderful to Barbara in her last months. Barbara was a truly special person, whose love and kindness personally touched anyone who knew her. She will be missed dearly. Survivors include her children Charles (Donna) of Virginia Beach, VA; Ann Neuenfeldt of Scottsdale, AZ; Kristin Cashman of Minneapolis, MN; Matthew (Karen) Cashman of Elko; Michael (CJ) Cashman of Edina; Noah (Paula) Cashman of Northfield; Mia (Paul) Reavis of Benson, AZ; her grandchildren Jesse (Elisha) Gallagher; Nick and Gigi Neuenfeldt; Kimesha (Charles) Winn-Miles; Peter (Emily) Winn; Andrew, Eleanor, Grace, Hugh, Caroline and Evan Cashman; Sam, Abe & Zoe Henson; and her great grandchildren Anna Gallagher; Maroun Henry and Windsor-Rhiannon Miles; and Rowan and Brixton Winn. She was preceded in death by all of her siblings, Charles E. Cashman, her son Peter and daughters Martha Cashman and Sarah Henson, her grandson Max Henson, her great grandson Charles Miles IV and partner Frank Bradshaw. Visitation at 4 p.m. followed by memorial service at 5 p.m. and then dinner, Tuesday, December 28th at Washburn-McReavy Edina Chapel, 5000 West 50th Street, Edina, MN 55436. Live stream of the memorial service located at Washburn-McReavy.com, search for Barbara's obituary & click on photo/video tab to view. Washburn-McReavy.com Edina Chapel (952)920-3996

Cashman, Barbara Ann (nee Sensenbrenner) Age 97 passed away peacefully on December 4, 2021. Barbara was born on November 16, 1924, in Menasha, WI, to Rudolph M. and Barbara A. Sensenbrenner as the sixth of seven children. She graduated as valedictorian... View Obituary & Service Information

The family of Barbara Ann Cashman created this Life Tributes page to make it easy to share your memories.

Send flowers to the Cashman family.