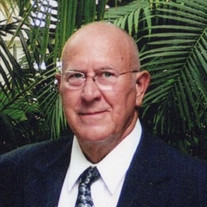 Armin "Nick" Eugene Nicklow passed away peacefully on Sunday, March 6, 2022 at the age of 86. He was born on March 24, 1935 to W. Herbert and Freda (McDonough) Nicklow in Barron County Wisconsin. Armin grew up on the family farm in the Dallas Township of Wisconsin. He moved with his family to Anoka, MN at the age of 17. Armin graduated from Anoka High School in 1954. He met his lovely wife Joanne (Jo) Miller on a blind date. They were married September 21, 1957. Armin was the co-owner, along with Richard (Dick) Daas, of Coon Rapids Plumbing (founded in 1974) until the fall of 1989. He was a skilled plumber, providing services and advice to family, friends, and neighbors. Armin loved three things: God, his family and playing sports. Armin, along with his wife Joanne, attended Elim Baptist church in Anoka until 1969, when they transferred to Coon Rapids United Methodist Church where he remained an active member until the end. He truly enjoyed the Senior Adult Fellowship Group. He was an avid ball player. Armin's fast-pitch team won the first state title of any kind for the city of Coon Rapids. As a center fielder, he hit over 400 for seven years. He played ball year-round: softball, basketball, and volleyball. Armin was a loving husband and father. He is survived by his wife Joanne (Jo) of 64 years; his children Janelle (Mike) Vos, Michael (Kirsten) Nicklow, and Mark (Michelle) Nicklow; his grandchildren Janessa (Michael) DeJong and Brandon (Shari) Nicklow; his beloved great-grandchildren Lilah and Logan DeJong; his sisters Sharlene Baughman and Nadine Massie, and sister-in-law Lucy Nicklow. He is preceded in death by his parents W. Herbert and Freda (McDonough) Nicklow; his brothers Clyde Nicklow and Warren Nicklow; and sisters Donna Purintun and Nelda Luebesmier. A celebration of his life will be held at 11:00 am, May 14, 2022 at Coon Rapids United Methodist Church located at 10506 Hanson Blvd NW, Coon Rapids. Visitation will be held from 10 - 11 am at the church. A luncheon will follow the service. In lieu of flowers, memorials are preferred to Coon Rapids United Methodist (CRUM) Building Fund.

Armin "Nick" Eugene Nicklow passed away peacefully on Sunday, March 6, 2022 at the age of 86. He was born on March 24, 1935 to W. Herbert and Freda (McDonough) Nicklow in Barron County Wisconsin. Armin grew up on the family farm in the Dallas... View Obituary & Service Information

The family of Armin Eugene Nicklow created this Life Tributes page to make it easy to share your memories.

Send flowers to the Nicklow family.