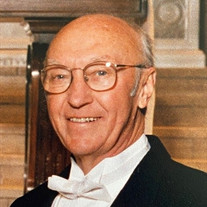 Link, Ardwin Guido Ardwin G. Link, of Bloomington, MN, passed away peacefully on April 27, 2022, at age 94. Born December 28, 1927 in Mpls. to Sigismund and Loretta (Westrup) Link. Married to the love of his life, Annette (Amberg) Link October 13, 1951 at St. Mary's in Bird Island, MN. Served in the U.S. Navy from 1945 to 1947. Worked for 34 years with the Ben Franklin Stores achieving the position of Regional VP. He joined United Hardware in 1986 and was appointed President and CEO in 1990 before retiring in 1993. He loved spending time with his family and took pride in their accomplishments. He was a devout Catholic, long time active parishioner of St. Richard's, and a 4th Degree Knight of Columbus. He was an avid golfer - a member of the hole in one club, enjoyed playing the piano, loved baseball and reading presidential biographies. He is preceded in death by his parents and son-in-law, Neil Patch. He is survived by his loving wife of 70 years, Annette; six children and their spouses: Thomas (Mary McLaughlin), Frederick, Brian (Holly), Deanne Patch, Gary (Maribeth), Teresa Binish (Joseph); 11 grandchildren, and a great grandson. Mass of Catholic Burial Thursday, May 5, 11:00 a.m. at the Church of St. Richard's, 7540 Penn Ave. S., Richfield with visitation preceding at the church at 10:00 a.m. Private interment at Resurrection Cemetery, Mendota Heights.

The family of Ardwin Guido Link created this Life Tributes page to make it easy to share your memories.

Send flowers to the Link family.