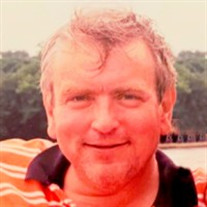 Gildea, Andrew J., Esq. Andrew J. Gildea passed away suddenly on November 5, 2021 at the age of 64. Born on April 4, 1957 in Woonsocket, RI to Captain Joseph A. Gildea and Dr. Sheila Murphy Gildea, Andrew was a loving husband, son, brother, uncle, cousin and godfather. He lived a faithful life, devoted to his family and this country. Andrew was a gentleman scholar and patriot to his core. His brilliant mind and quick wit touched everyone he met. Virtually every Gildea/Skjerven family gathering centered on Andrew's stories and jokes. He had an astonishing, photographic memory and could always be counted on to build obscure details of art, history and literature into a conversation. Generous with his time & intellect, Andrew opened doors as often as he could for his loved ones, and, when those doors did not open easily, he knocked them down. During his youth, Andrew and his family crisscrossed the country throughout his father's career as a Naval Officer. Before college, Andrew attended eight different schools and was a leader at each & every one, as evidenced by the fact that he was elected Homecoming King and Student Body President at Peninsula High School in Gig Harbor, Washington, where he also became a National Merit Scholar. He was a multi-season athlete and Captain of Peninsula's varsity water polo, swimming and football teams. Andrew proudly attended the University of Virginia where he joined the editorial board of the Cavalier Daily. It was there he sharpened his encyclopedic knowledge of sports statics and history. After graduating from UVA, Andrew joined the staff of the Republican National Committee, where his passion for politics and democracy took deep root. There he developed a close relationship with Senator Bob Dole who later asked Andrew to serve as a Special Liaison to his Presidential Campaign. Several years later, Congressman Arlan Stangeland who served Minnesota's 7th Congressional District, recruited him away from the RNC. He served as Congressman Stangeland's Press Secretary for many years. While doing so, he met the two great loves of his life - the state of Minnesota and Lorie Skjerven, who became his wife and life-long partner on January 1, 1984. His devotion to Lorie was on full display every day of their 37-year marriage. Andrew received his Juris Doctorate from the Georgetown University Law Center in 1989 & was Editor-In- Chief of the American Criminal Law Review. He also received the Dean's Certificate for Outstanding Service to the GULC Community. After receiving his law degree, Andrew went into private practice at Howrey & Simon, where he worked in the antitrust group. In 1993, Andrew and Lorie returned to Minnesota where he worked on many political campaigns, held various staff positions at the state legislature and worked for Sheriff Rich Stanek in Hennepin County. His accolades included Legislative Staff Person of the Year & recipient of the Hennepin County Sheriff's Award of Merit. Andrew also became an avid booster of Gopher Women's Athletics, particularly the Women's Softball team. While building his own political career, Andrew proudly partnered with Lorie as she rose through the ranks of the Minnesota Judiciary, most notably standing by her side at her investiture as the Chief Justice of the Minnesota Supreme Court in 2010. His love for Lorie knew no bounds. He described it best himself when he said, "she's the best person I know." Andrew is survived by his wife, Lorie; brother Daniel H. Gildea; sisters Maureen G. Mann (David) and Deirdre G. Johnson (Jeffrey); sister in law Peggy Genereux (Kermit); brother in law James Skjerven (Jenifer); aunt and uncle Judy and Bob McLaughlin; many nieces, nephews, goddaughters, cousins & a large extended family. Andrew's passing creates a deep void for all of his family and friends but he also leaves a legacy of boundless love, laughter and generosity. There will be a funeral mass for Andrew at Saint Ambrose Catholic Church, 4125 Woodbury Drive, Woodbury, MN on November 12, 2021 at 11:00 am, with a visitation at the church starting at 10 am. In lieu of flowers, donations may be made to St. Ambrose Church or the Gophers Softball program c/o UM Golden Gopher Fund. Washburn-McReavy.com Davies Chapel 612-377-2203

The family of Andrew Joseph Gildea created this Life Tributes page to make it easy to share your memories.

Send flowers to the Gildea family.