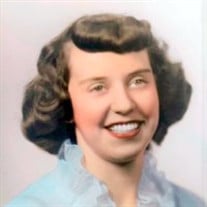 Waagen (Haase), Alice Marie born in Hewitt, Minnesota on June 12, 1930. A longtime resident of Richfield, current resident of Clear Lake, passed away at the age of 91, peacefully in her home and into the arms of the Lord on December 24, 2021.... View Obituary & Service Information

The family of Alice Marie Waagen created this Life Tributes page to make it easy to share your memories.

Send flowers to the Waagen family.