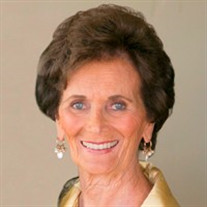 Ingebrand, Adelaide "Addie" (nee McGuigan) Born May 30, 1928 to Marie Roth & Hugh McGuigan in Wabasha, Minnesota. Died peacefully surrounded by her children October 25, 2021. Addie was the 6th of 7 children. Her early years were spent in the scenic river town of Wabasha, Minnesota, where she attended Saint Felix Elementary School before moving to St. Paul at age 10. Shortly after this family move, her beloved father died which transformed her carefree life and fueled her focus as a very determined, independent young girl, excelling in her studies. Addie was the Salutatorian of her class at St. Joseph's Academy, a national debate champion, and graduated Summa Cum Laude from the College of St. Catherine (1950) earning the Phi Beta Kappa distinction. She greatly appreciated the Sisters of St. Joseph of Carondelet, crediting their commitment to education, academic excellence and informed independent thinking as traits empowering those receiving an all "girls' school" education. Right after college, Addie married her college sweetheart, George Ingebrand. It was a marriage of 70 years and a testimonial to love and commitment! Nine months after their wedding, George shipped out to Korea with the Marine Corps. During that time, Addie worked as an executive secretary for Federal Cartridge and did a brief teaching stint at St. Margaret's Academy. After George's return from the war, they started their family in Nativity Parish in St. Paul. Three children over the next six years kept Addie busy as a wife and a mother. It was the 1950s, but make no mistake, Addie was no "June Cleaver"!! In addition to maintaining a spotless home, she and George were active community volunteers, including in Ramsay County politics in the 1960s 1970s. She was a proud member of the Junior League and served on its board, chairing many civic events; the United Way; the Minnesota Orchestra (WAMSO); tutored unwed mothers; led Cub Scout and Campfire Girl troops; and belonged to the Centennial Dance Club where she and George were a commanding presence on the dance floor! Addie was also tennis player, a certified water aerobics instructor (into her 80s), an accomplished seamstress, a dedicated bridge player and a marvelous cook and entertainer. As her children were leaving the nest, Addie enrolled in a Master's program at the University of Minnesota, where she studied modern fiction, earning her degree and teaching credentials, leading to a 25 year teaching career, including as an English teacher and reading specialist at Highland Park High School. After retirement, Addie dedicated her energy to tutoring high school students and moderating many book discussion groups, including for the Minnesota public libraries in the Minneapolis and surrounding area & the "Book Case" in Wayzata. Basic facts aside, our friend and mother Addie was an extraordinary woman. Her family affectionately referred to her as the "Chief". She was always meticulously groomed, starched, pressed and fashionably dressed. Family came first, like her life, both guided by her strong faith and moral compass. She was firm but loving, serious but laughed easily. Her intellectual curiosity knew no bounds. She was a voracious reader, a dedicated orchestra patron and a great lover of the arts. Sharing her love of literature and reading brightened and enriched a lot of lives. She enjoyed and participated in her bridge and book club right up until 4 days before her death! To her dying day Addie never stopped learning, debating and appreciating the beauty around her, especially her gardens. Family and her children were her greatest joy, especially those summers spent with them on her beloved Nantucket Island and Mantrap Lake. Her 93 1/2 years were so full, rich and vital that for all who knew and loved her, her sudden death came way too soon. She died 11 months to the day the love of her life, George, her husband died. Addie was preceded in death by her parents Hugh and Marie McGuigan, her siblings Margaret Marrinan (Mike), John McGuigan (Lorraine), Robert McGuigan (Marge), William McGuigan (Thelma), and Helen Gillette (Ken) and is survived by her younger brother Hugh McGuigan (Sandy), her daughters, Mary Ingebrand-Pohlad and Cynthia Beuerlein (John), her son George Ingebrand, Jr. (Jill) and grandchildren, Alexandra Pohlad (Robbie Phillips), Charles Pohlad, Katherine McMillan (Zach), John Beuerlein, Jr. (Casey), Laura Beuerlein, Nico and Dana Ingebrand and great grandchildren George and Freddy Phillips. A private family service will be live streamed from the church of Saint Patrick, Edina, Minnesota, on the 24th of November. studio.youtube.com/video/oirO1XY1XSs/.... Interment at Lakewood Cemetery. Memorials preferred to Twin Cities Public Television or Church of Saint Patrick-Edina. Washburn-McReavy.com Edina Chapel 952-920-3996

Ingebrand, Adelaide "Addie" (nee McGuigan) Born May 30, 1928 to Marie Roth & Hugh McGuigan in Wabasha, Minnesota. Died peacefully surrounded by her children October 25, 2021. Addie was the 6th of 7 children. Her early years were spent in the... View Obituary & Service Information

The family of Adelaide " Addie "Joanne Ingebrand created this Life Tributes page to make it easy to share your memories.

Send flowers to the Ingebrand family.